Music for Weddings … Look no further than Martin Bell and The All Stars Band. 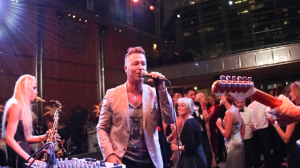